Is there a OBD adapter for iPhone or other iOS devices?

Yes, there is. PLX Kiwi 2 WiFi 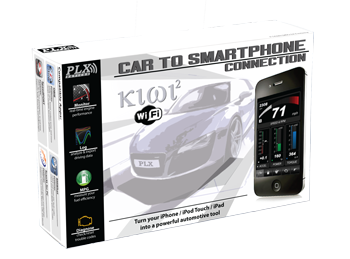 It uses WiFi signal to transmit car data instead of Bluetooth. PLX Kiwi 2 WiFi is the one of the best selling OBD2 WiFi adapters. The Kiwi 2 WiFi made some improvements over the first generation of Kiwi 1 WiFi. The transmitter got 1/4″ thinner and the cable length got 3′ shorter. And a new advanced power saving circuit shuts off power completely. This allows the Kiwi 2 Wifi to be permanently connected to the OBD port without draining a vehicle’s battery. After 5 minutes of inactivity, the Kiwi 2 Wifi automatically enters a low power sleep mode. To turn the unit back on, a simple press of the soft switch wakes the device back up.

The Kiwi 2 WiFi has 8-pin connector on the back to be mated with the PLX iMFD Adapter. PLX iMFD Adapter allows you to add additional aftermarket sensors for monitoring on your iPhone or other iOS devices. This is ideal if your OBD port does not report the sensors you need or if the OBDII port reports the sensor with delay.

The adapter’s Dimension is 1.25″ x 2.72″ x 0.60″ attatched 3-foot cable. What’s in a box? Kiwi 2 Wifi Main Unit & User Manual. All applications are downloaded through the Apple App Store. Some apps may need to be purchased separately from the Kiwi Wifi. (*Recommended apps: Rev by DevToaster, DashCommand by Palmer performance Engineering). Click here to read full product reviews at amazon.com.

*Great News for all users of Apple products. A decent OBD app is now available at a fractional price of other existing apps. Engine Link costs only $5.99. It is compatible with iPhone 3GS or later, iPod touch 3G or later, and iPad. Requires iOS 5.0 or later. Let’s see more details about this app.